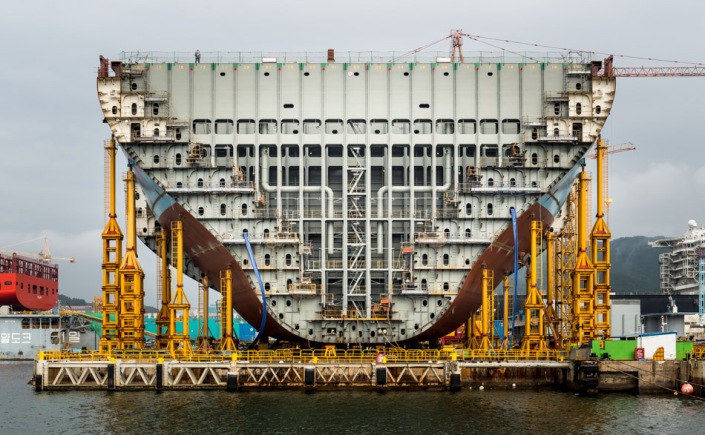 The Maersk Triple E is the largest ship ever built. Photographer Alastair Philip Wiper was commissioned to photograph how the ship is being built, and shares his experience on his blog:

The Daewoo Shipbuilding and Marine Engineering (DSME) shipyard in South Korea is the second largest shipbuilder in the world and one of the “Big Three” shipyards of South Korea, along with the Hyundai and Samsung shipyards. The shipyard, about an hour from Busan in the south of the country, employs about 46,000 people, and could reasonably be described as the worlds biggest Legoland. Smiling workers cycle around the huge shipyard as massive, abstractly over proportioned chunks of ships are craned around and set into place: the Triple E is just one small part of the output of the shipyard, as around 100 other vessels including oil rigs are in various stages of completion at the any time. The man in charge of delivering the Triple E’s for Maersk is Søren Arnberg, and the Matz Maersk is the last ship he is delivering before his retirement. Søren started his career with Maersk as an engineer in 1976 and has travelled the world since, contributing to the construction of hundreds of ships. Søren is hard-boiled of Dane with a glint in his eye and a dry sense of humor, who is not impressed by much.”It’s just another container vessel, it’s just a bit bigger” he says. “I’ve never been in a project with so much focus. Discovery Channel even made 6 episodes about it. It’s just a ship.” Søren, who is one of the stars of the Discovery Channel series, still hasn’t even watched it. “What are you going to do when you get home?” I ask. “Ask my new boss” he replies, referring to his wife. 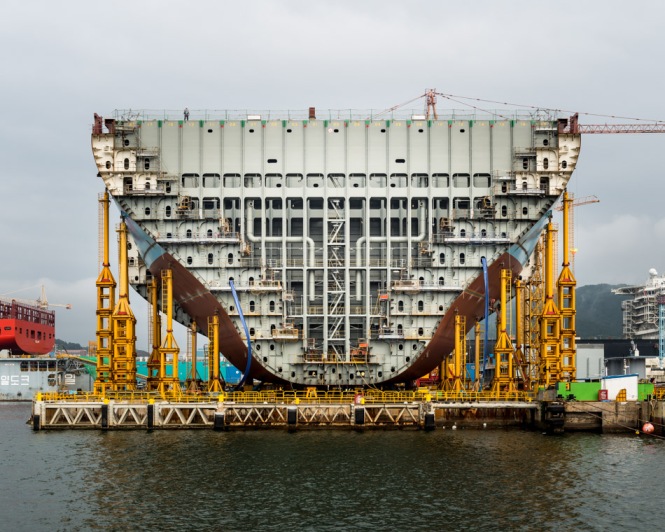