This is a very good op-ed by Sherry Turkle, a professor in the program in Science, Technology and Society at MIT, on the assault of technology in our lives. An excerpt:

Across generations, technology is implicated in this assault on empathy. We’ve gotten used to being connected all the time, but we have found ways around conversation — at least from conversation that is open-ended and spontaneous, in which we play with ideas and allow ourselves to be fully present and vulnerable. But it is in this type of conversation — where we learn to make eye contact, to become aware of another person’s posture and tone, to comfort one another and respectfully challenge one another — that empathy and intimacy flourish. In these conversations, we learn who we are.

But this was the key paragraph for me:

Studies of conversation both in the laboratory and in natural settings show that when two people are talking, the mere presence of a phone on a table between them or in the periphery of their vision changes both what they talk about and the degree of connection they feel. People keep the conversation on topics where they won’t mind being interrupted. They don’t feel as invested in each other. Even a silent phone disconnects us.

What are we to do? Sherry Turkle provides a few suggestions (among them, practicing unitasking):

One start toward reclaiming conversation is to reclaim solitude. Some of the most crucial conversations you will ever have will be with yourself. Slow down sufficiently to make this possible. And make a practice of doing one thing at a time. Think of unitasking as the next big thing. In every domain of life, it will increase performance and decrease stress.

But doing one thing at a time is hard, because it means asserting ourselves over what technology makes easy and what feels productive in the short term. Multitasking comes with its own high, but when we chase after this feeling, we pursue an illusion. Conversation is a human way to practice unitasking.

What kinds of things are you doing to bring you closer to those around you? How do you practice maintaining (or building) empathy for others?

The Atlantic rightly points out that a new universal caption can be made applicable to (virtually) every New Yorker cartoon (as part of its weekly caption contest). And it is this: “I’d like to add you to my professional network on LinkedIn.”

The designer Frank Chimero came up with the clever idea via a few posts on Twitter, with some readers adding to the choir: 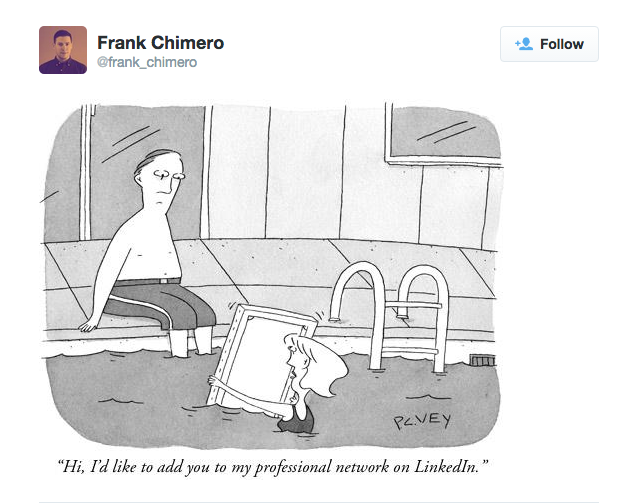 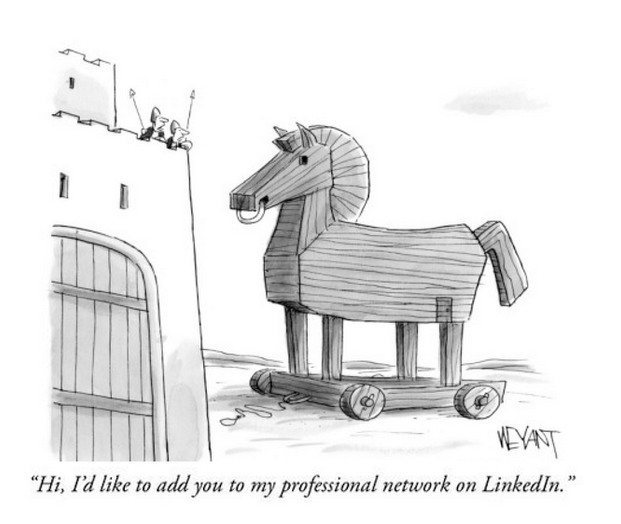 Genius. Is there anyone out there who doesn’t think those unsolicited requests to add you on LinkedIn are uncool and spammy?

In a secluded Nevada desert, a group of friends build the first scale model of the solar system with complete planetary orbits. Using simple objects (marbles and inflatable balls), this do-it-yourself project is beautiful.

It’s pretty incredible that the largest orbit, that of Pluto, is seven miles away from the sun with the scale presented in the video.

I wish there was a “behind the scenes” video to see how they recorded and edited the orbits of the planets.

The best thing I read today was a short story by E.M. Forster titled “The Machine Stops.” I found out about it while reading Atul Gawande’s tribute to Oliver Sacks.

“The Machine Stops” is a story about over-reliance on technology,in which people live alone in small podlike rooms in a honeycomb of vast underground cities spread across the globe. The physical comforts of food, clothing, and shelter are all taken care of by the global Machine. We meet a female protagonist named Vashti, who has to simply press a button to receive food or listen to music or summon a hot-bath :

The clumsy system of public gatherings had been long since abandoned; neither Vashti nor her audience stirred from their rooms. Seated in her armchair she spoke, while they in their armchairs heard her, fairly well, and saw her, fairly well. She opened with a humorous account of music in the pre Mongolian epoch, and went on to describe the great outburst of song that followed the Chinese conquest. Remote and primæval as were the methods of I-San-So and the Brisbane school, she yet felt (she said) that study of them might repay the musicians of today: they had freshness; they had, above all, ideas. Her lecture, which lasted ten minutes, was well received, and at its conclusion she and many of her audience listened to a lecture on the sea; there were ideas to be got from the sea; the speaker had donned a respirator and visited it lately. Then she fed, talked to many friends, had a bath, talked again, and summoned her bed.

And how Vashti’s son named Kuno wanted to meet his mother face-to-face:

Who knew that a story published more than 100 years ago would be so prescient of the world that is today–with social media pulling us at every angle, allowing Sacks to lament how it can absorb people, “to the exclusion of everything else, throughout their waking hours.”

The story reminds me of 1984, Blade Runner, and Jorge Luis Borges’s “The Library of Babel.” It’s definitely worth reading. You can follow the link or purchase a Kindle edition of the short story for $0.99 here.

Dan Piepenbring, web editor of The Paris Review, pens a great piece about the pleasures of not reading.

Given the curious mix of flux and stability that describes our lives as readers—sorry, our lives, period—it’s next to impossible to know when we’re really missing out. A lot of the tragedy in the consumer preference algorithms deployed by Amazon and Netflix is in seeing the limits of your own taste: in recognizing how many things you will definitively not enjoy, and wondering by what aesthetic contortion you could find something new.Must Love Dogs has always been there for me; why have I so steadfastly refused to be there for it?

This gives rise to a kind of nervous contrarianism: we deny authors who would clearly suit us, and seek out those who will almost certainly disappoint us, all in the name of eclecticism. And soon enough, it seems that what passes as taste is an arbitrary extension of our insecurities and neuroses, and that an insane hubris undergirds every value judgment, and that the best thing to do would be to start over, bringing no preconceptions at all into our lives as readers. This is a position I find myself in about once a day. On that point, at least, I can agree entirely with Jones: I am always crushed by how many books I have not read.

This is a timely essay for me: I haven’t been doing much (or as much as I would like) reading in the last month or two…