In 1626 Christopher Scheiner published the Rosa Ursina sive Sol which used a variety of graphics to reveal his astronomical research on the sun. He used a series of images to explain the rotation of the sun over time (by tracking sunspots).

In 1786, William Playfair published the first data graphs in his book The Commercial and Political Atlas. The book is filled with statistical graphs, bar charts, line graphs, and histograms, that represent the economy of 18th century England.

Perhaps most famously, the English nurse Florence Nightingale, in 1857, used information graphics persuading Queen Victoria to improve conditions in military hospitals, principally the Coxcomb chart, a combination of stacked bar and pie charts, depicting the number and causes of deaths during each month of the Crimean War. 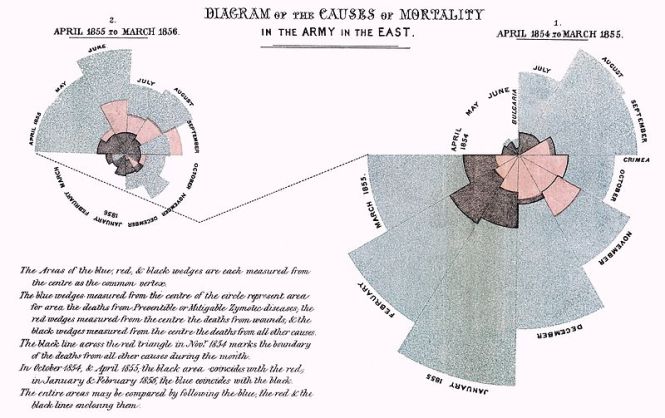 "Diagram of the causes of mortality in the army in the East," published by Florence Nightingale.

The piece in The Morning News profiles, among a few other selections, the French engineer Charles Joseph Minard, who devised a number of new and influential infographic techniques. Among the most famous of his charts from this period is the 1869 “Carte figurative des pertes successives en hommes de l’armée française dans la campagne de Russie 1812–1813 comparées à celle d’Hannibal durant la 2ème Guerre Punique.” The two diagrams, published together, show the size and attrition of the armies of Hannibal in his expedition across the Alps during the Punic wars and of Napoleon during his assault on Russia. The colored band in the diagrams indicates the army’s strength of numbers—in both charts, one millimeter in thickness represents ten thousand men. The chart of Napoleon’s march includes an indication of temperature as well. 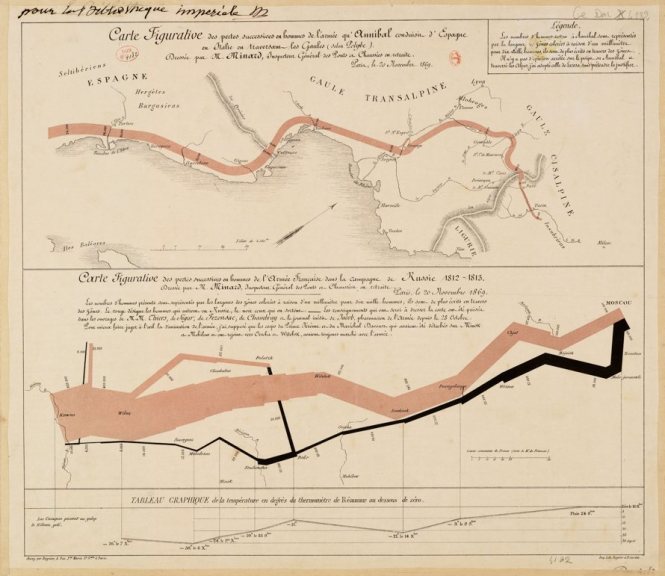 Top: Hannibal in his expedition across the Alps during the Punic wars. Bottom: Napoleon's assault on Russia.

See this Wikipedia link for more.

One thought on “The History of Infographics”