The new cover photo from New York Magazine is absolutely spectacular, showing the division of power-less and aglow Manhattan after Hurricane Sandy: 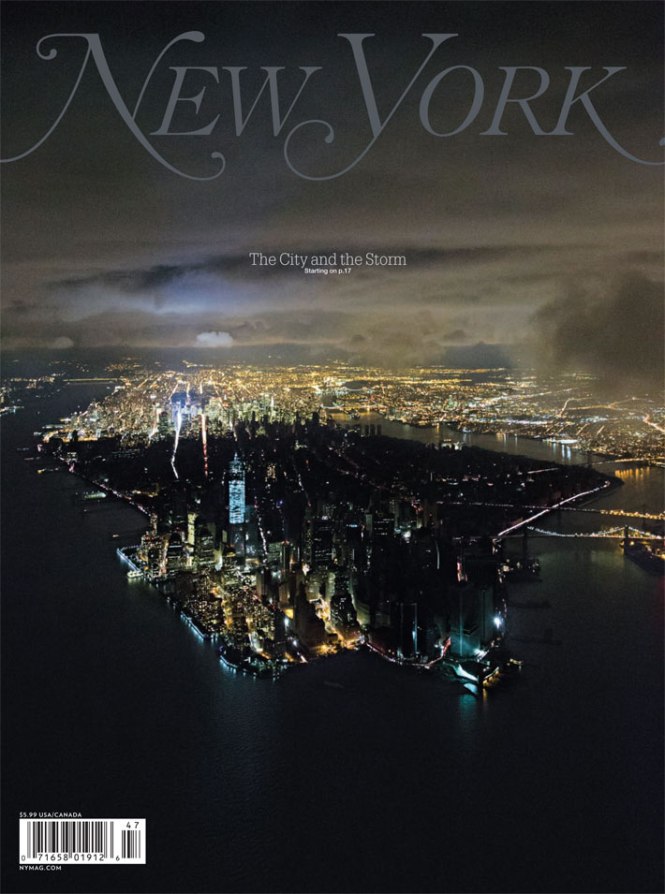 The photograph was captured by Iwan Baan. The editors at the NY Magazine explain how the photo came out to be:

An improvised newsroom was soon up and running, with 32 editors, photo editors, designers, and production specialists squeezed around a conference-room table, down the length of which snaked a tangle of power strips, extension cords, and chargers resembling similar arrays sprouting across the city. At this point, proofs were due to go to press in 72 hours. Staffers spent them scrambling to secure writers and photographers as well as exchanging personal e-mail addresses to make it possible to transfer files (our servers were still down), arranging car pools, finding rooms at three different hotels for colleagues from darkened neighborhoods, and draining our hosts of coffee and soda. The easiest part of a harried three days came Friday around noon, when we met to settle on the cover. A photograph taken by Iwan Baan on Wednesday night, showing the Island of Manhattan, half aglow and half in dark, was the clear choice, for the way it fit with the bigger story we have tried to tell here about a powerful city rendered powerless. We crammed back into the conference room, raced to finish our pages, and hoped, like other New Yorkers, that everyone would find the lights on when they got home.

Update (11/4/12): According to Poynter, Baan created the photograph with the Canon 1-D X with the Canon 24-70mm f/2.8L lens on full open aperture (f/2.8). The camera was set at 25,000 ISO and Baan used 1/40th second shutter speed. Baan mentions that this photograph would have been impossible to photograph without the ability to boost to such a high ISO, but I disagree. He could have underexposed the image significantly and brought out the shadows in post-processing. How much leverage he has in editing photos, however, I do not know.