Is there a term for Sabemetrics of basketball? What Muthu Alagappan, a Stanford undergrad, is doing in his spare time could qualify. His new super-nerd study suggests that there are really 13 positions in basketball—not just five.

The first thing to know about the thirteen NBA positions—Muthu labeled them offensive ball-handler, defensive ball-handler, combo ball-handler, shooting ball-handler, role-playing ball-handler, 3-point rebounder, scoring rebounder, paint protector, scoring paint protector, role player, NBA first team, NBA second team, and one-of-a-kind—is that the idea of thirteen NBA positions is a misnomer. Anyone who’s ever watched basketball knows that there are more than thirteen positions, and not even Isaiah Thomas would put together a team based solely on five positions. Indeed, the best basketball players are like soccer midfielders: They can function anywhere on the court, they make their teams better, and they’re not defined by position. But Muthu’s positions weren’t all that rigid. Tony Parker is an offensive ball-handler, which separates him from John Wall, considered a combo ball-handler, not based on anything stylistic but solely because of their statistics. Tyson Chandler, the NBA’s Defensive Player of the Year, is a paint protector who specializes on one side of the floor. Kevin Love and Blake Griffin are actually scoring paint protectors. Some players are in a league of their own: Kevin Durant and LeBron James, for example, are NBA first-teamers. Derrick Rose and Dwight Howard are one-of-a-kinders whose statistical combinations make them NBA outliers.

The graphic representation of the 13 players looks like something out of a molecular biology textbook: 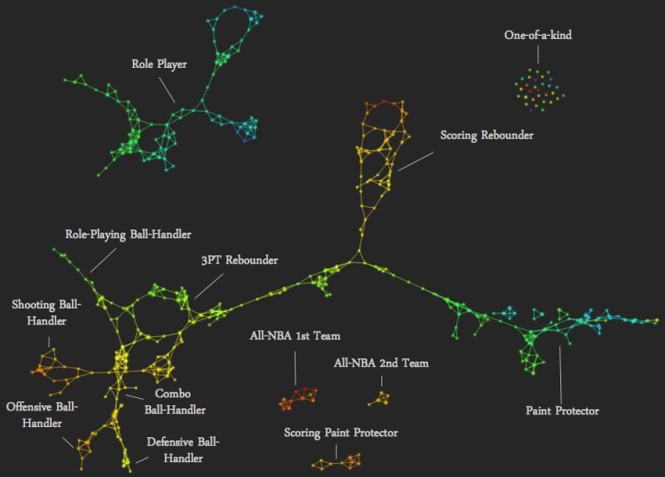 The thirteen types of players in the NBA

Read the rest of the piece here.

One of the most anticipated NBA finals in years is set to begin tonight.

The shooting patterns for the players on the Miami Heat and the Oklahoma City Thunder reveal where they are most dangerous on the court. Before the series begins tonight, compare each player’s strengths using court maps and analysis by Kirk Goldsberry, a geography professor at Michigan State, in this stunning New York Times infographic.

The NBA couldn’t ask for anything bigger to cap the shortened season: the Miami Heat vs. the Oklahoma City Thunder in the NBA finals. It’s LeBron vs. Durant, or in the words of Rick Reilly for ESPN, who is infinitely quotable here:

Loser empties ashtrays in Kabul for a year.

They look nothing alike, play nothing alike, and live in two cities that have nothing in common, apart from both towns liking their dinner served absolutely rare. In Miami, it’s sushi. In Oklahoma City, it’s steak.

James is four years older by birthdays than Durant and 40 years older by troubles. He is only 27, but looks 37, which is what comes from playing under 1,000 pounds per square inch of pressure every game. Children and grandmothers spit his name for the way he jilted Cleveland, for the way he promised seven rings before winning one, for the Hobbit beard.

The rest of the piece here.

As for me? I am rooting for Miami, because I wouldn’t stand the pundits proclaiming how LeBron is a choker if he can’t capture the title for South Beach.

The phenomenon that is #Linsanity has swept the nation… The saga began after Jeremy Lin had a 25-point Game at Madison Square Garden on February 4. Since then, Jeremy Lin has been averaging more than 20 points and dishing out nearly 9 assists per game for the New York Knicks. In my opinion, he has single-handedly resurrected the shortened NBA season.

But what of Jeremy Lin’s evolution? Cut twice by two NBA teams, this fascinating New York Times story reveals how Jeremy Lin’s evolution as a point guard we observe today was gradual. Over a span of eighteen months, he has shown dedication to get better at his game. It meant coming to the training arena before anyone else and leaving after everyone else has gone home. The Jeremy Lin that is now the starting point guard for the Knicks isn’t the same player as the one who entered NBA after his playing days at Harvard:

It began with lonely 9 a.m. workouts in downtown Oakland in the fall of 2010; with shooting drills last summer on a backyard court in Burlingame, Calif.; and with muscle-building sessions at a Menlo Park fitness center.

It began with a reworked jump shot, a thicker frame, stronger legs, a sharper view of the court — enhancements that came gradually, subtly, through study and practice and hundreds of hours spent with assistant coaches, trainers and shooting instructors over 18 months.

My favorite anecdote from the story is a game called “Beating the Ghost”. This passage shows Lin’s dedication to continue improving:

Doc Scheppler has coached in Bay Area high schools for 34 years. He first saw Lin as a scrawny eighth-grader. But even then, “he had the ability to see the floor, make the right decision, make the correct angle pass. And that is just not done at 13, 14 years old.”

Last summer, Lin sought out Scheppler to help him with his 3-point shot. It was improving, but Lin was still shooting too high and throwing the ball — a “flying weapon,” Scheppler called it.

Working mostly in Scheppler’s backyard in Burlingame, Lin learned to begin his shot on the way up and release it at his peak. They also worked on a variety of in-game situations: the catch-and-shoot, off-the-dribble shots, and hesitation moves to create space.

Lin’s perfectionist tendencies came out in a 3-point-shooting drill called “beat the ghost,” in which Lin earned 1 point for every shot he made at the arc and the “ghost” earned 3 points for every shot Lin missed.

On one occasion, Lin made 17 3-pointers but lost 21-17, then kicked the ball in anger, Scheppler recalled with a chuckle. He refused to stop until he beat the ghost. It took 14 games. When Scheppler tallied up all of the scores for the day, Lin had converted 71 percent of his shots from the arc. “That’s the beauty of Jeremy Lin,” Scheppler said. “It’s not about moral victories. It’s ‘I have to win.’ ”

Of all the stories I’ve read about Jeremy Lin, The New York Times piece is one of (if not) the best explainer of Jeremy Lin’s rising stardom in the NBA. It didn’t happen overnight.

The New York Times has a great story on Jeremy Lin, an NBA player currently with the New York Knicks. He is an Asian-American in a league devoid of them (the only other name that comes to mind is Yao Ming). He is the N.B.A.’s first American-born player of Taiwanese or Chinese descent and only the fourth Asian-American in league history.

Lin received no college scholarship offers, even though he lead his Palo Alto High School team to a 32-1 record and the California championship. At Harvard, he was twice named to the all-Ivy League first team and delivered a signature 30-point performance against 12th-ranked Connecticut. In June 2010, he went undrafted in the NBA. His defense, jump shot, and just about everything else seemed subpar compared to the NBA elites. Why is he receiving so much attention all of a sudden? Not only is he helping the Knicks overcome a mediocre season, but

[T]he Lin phenomenon transcends race or nationality. He resonates with devout Christians, because he speaks openly of his faith, a sort of Taiwanese Tim Tebow. He taps into the passions of Harvard alumni, Ivy Leaguers, New Yorkers and anyone anywhere who loves an underdog.

Below, some highlights of Lin’s ability to pass, score, and play defense:

Related: this piece on Jeremy Lin reminded me of the Remarkable Story of the Caltech Basketball Team.