On July 19, 1957, five Air Force officers and one photographer stood together on a patch of ground about 65 miles northwest of Las Vegas. They’d marked the spot “Ground Zero. Population 5” on a hand-lettered sign hammered into the soft ground right next to them. On that day, an F-89 jets drops off a nuclear missile carrying an atomic warhead.

There is a countdown; 18,500 feet above them, the missile is detonated and blows up. Which means, these men intentionally stood directly underneath an exploding 2-kiloton nuclear bomb. One of them, at the key moment (he’s wearing sunglasses), looks up. 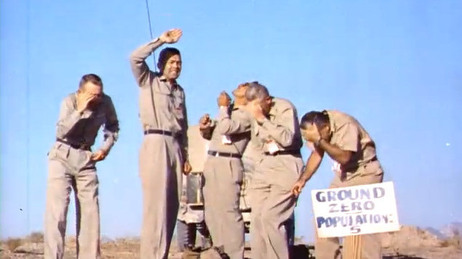 Robert Krulwich uncovers the details behind this fascinating bit of daredevil history:

This footage comes from our government’s archives. It was shot by the U.S. Air Force (at the behest of Col. Arthur B. “Barney” Oldfield, public information officer for the Continental Air Defense Command in Colorado Springs) to demonstrate the relative safety of a low-grade nuclear exchange in the atmosphere. Two colonels, two majors and a fifth officer agreed to stand right below the blast. Only the cameraman, George Yoshitake, didn’t volunteer.

The country was just beginning to worry about nuclear fallout, and the Air Force wanted to reassure people that it was OK to use atomic weapons to counter similar weapons being developed in Russia. (They didn’t win this argument.)

Click through to find out what happened to these men, and which ones are still alive.