Take a look at the photograph below. Do you think it is real or fake? Or it is simply a matter of perception? 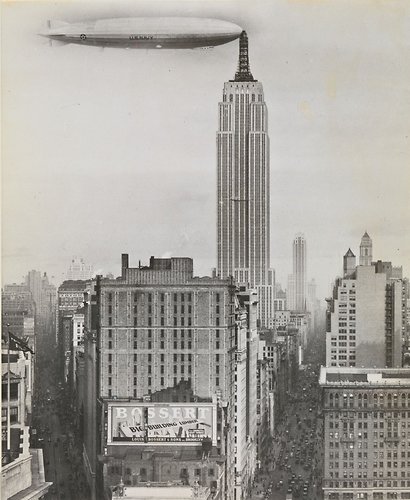 The New York Times considers this photograph, and a few others, in this piece about an exhibition focusing on manipulated photography at the Metropolitan Museum of Art:

A technical problem in the 19th century, for example, was that photographic emulsions were disproportionately sensitive to blue and violet light, resulting almost always in overexposed skies. So like many other landscape photographers, Carlton E. Watkins inserted properly exposed clouds from a different negative into the blank sky in a grand view of cliffs along the Columbia River in Oregon that he shot in 1867. In the exhibition you can compare one print without and one with the interloping clouds. Though artificially produced, the print with clouds looks more natural.

But, you might ask, is tweaking to achieve more realistic effects in the same category as flimflam? At about the same time that Watkins was photographing out West, the journeyman studio photographer William H. Mumler made a name for himself selling “spirit photographs,” in which ghostly visitors appeared in portraits of real people. If you look at his prints now, it is hard to believe that anyone could have been deceived by them, but many were, until the law intervened and charged him with fraud and larceny.

Mia Fineman, the organizer of the exhibition, claims that her goal is to make viewers understand that “a different view of photography prevailed among the intelligentsia for most of the 20th century.” Take a look at this photograph, for example:

Photographed by William Mumler, such a “spirit photograph” fooled many people in its heyday. So ferocious was the case against him that he was taken to court for fraud, with noted showman P. T. Barnum testifying against him. Though found not guilty, his career was over, and he died in poverty.

If you’re in New York, or visiting there in the next couple of months, the exhibition Faking It is something worth checking out.